1. Galilei was the first person to think the earth revolved around the sun.

. This was not necessarily true. In fact, this is a huge generalization of facts. People realized that our planet wasn’t the center of the universe in 300 BCE.
Greek scientist, Aristarchus of Samos was the first person to suggest this idea. However, there was no way to prove this theory and only until the 16th century did astronomer Nicolaus Copernicus decide to work on this theory. There were a lot of people who disagreed with him but he also had a lot of supporters like for example, Galilei. So, Galilei did not suggest this theory but rather, he was the one to actually prove it thanks to the telescope he managed to invent.

2. Alexander the Great had the biggest empire in human history.

. Alexander the Great created a huge empire not only by the standards of the time but even by today’s standards. This is why he is believed to be the greatest conqueror of all time. But if we take a look at actual facts, we will see that the Mongol Empire was actually the biggest in the world.
In the 12th-14th centuries, the Mongols owned all of Central Asia, China, the Middle East, Korea, and Eastern Europe all the way up to Austria. To put this in perspective: Alexander the Great only had ancient Egypt, a part of Persia, and a part of India. Also, right after the monumental Alexander the Great died, his empire ceased to exist whereas the Mongol Empire existed for a much longer time. 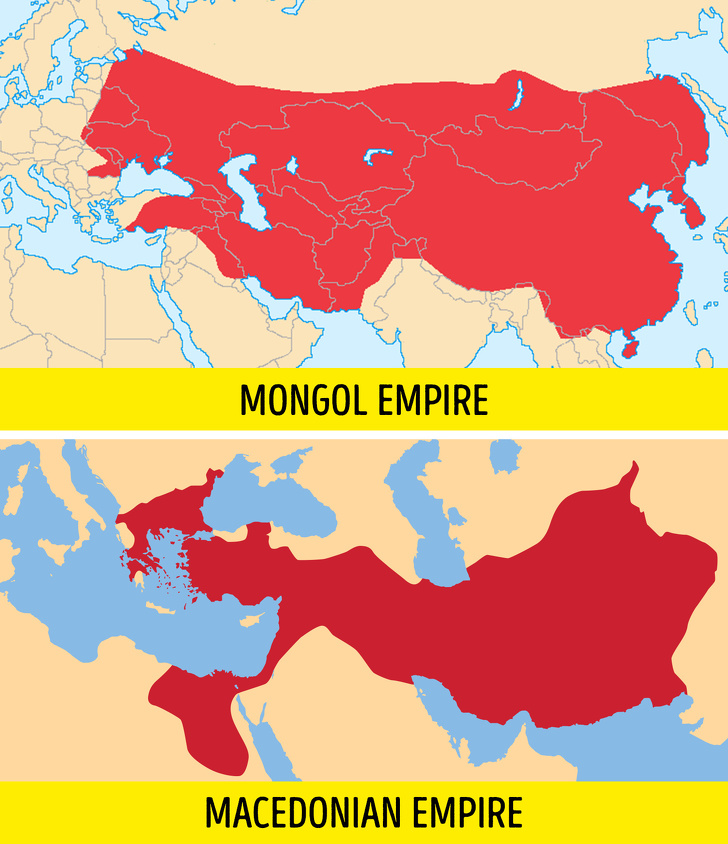 3. In the Middle Ages, witches were burned.

. Many people truly believe that thousands of innocent women were burned in Europe in the Middle Ages. But in fact, up to the 15th century, the church denied the fact that witches existed. The mass witch hunt started in the 16th and 17th centuries. The reason for this was the plague pandemic.
The diseases spread so quickly that 24% of the European population died in just several years. There was no remedy for it and people were in such a panic, they thought that it was caused by witchcraft. So by the 16th century, both the church and regular people were scared of magic and executed everything who had any connection to it. But witches were burned only to demonstrate this to people. Most of the time, they were hanged — this was the most popular way of execution.